The studios were designed, both architecturally and acoustically, by the highly qualified Czech firm AVA Ing. Rostislav Daněk: http://www.ava-jh.cz/web/. This firm performed repeated tests and set the acoustic parameters for the installation to a very high standard.

For the acoustic insulation of the studio, AVA selected three different lining compounds, each having its own sound absorption coefficients. Ecophon Akusto Wall panels were employed for effective balancing of secondary and higher frequencies, vibration panels were used to absorb the lower midranges and bass, and finally bass traps were placed to optimize the 60 Hz, 80 Hz, 90 Hz, 100 Hz and 120 Hz bandwidths.

The studio has a large recording room and three insulated booths available. This allows for group recordings without the risk of acoustic interference, such as leaking, whereby the sound from stand-alone instruments can be picked up and contaminate the main source. 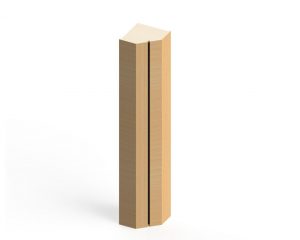 The reverberation time (RT) in the main studio, by virtue of optimizing and balancing the layout of acoustic panelling, is from 0.35 to 0.42 seconds and balanced across all frequency ranges – bass, mid and high frequencies. These values conform precisely to the requirements of cubatures used by small and medium sized orchestras. 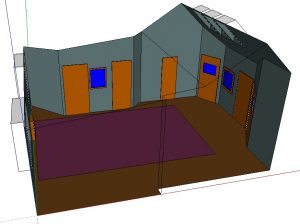 Precise attention to detail has been further incorporated in the form of C80 level clarity and a high level of intelligibility in the form of ‘Articulation Loss of Consonants’ (ALcons). The level of clarity, important in differentiating temporal tones in fast moving musical passages, has been measured as being of high calibre. The measured rate of intelligibility, essential for distinguishing subtle differences in vocal pieces, is also of high standard. The ALcons rating of the whole studio area ranges between 1% and 2%, representing excellent speech intelligibility. 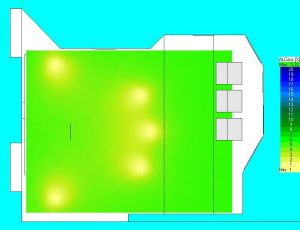 The main studio was conceived from the start for 3D surround listening. Sound energy spreads out evenly in the space, leaving nowhere for standing waves to form. These characteristics also work conversely when recording instruments, as the diffusion that occurs in the chamber allows a purer capture of each instrument itself, or by manipulating the directional characteristics of the microphone, gaining unique shades of instrumental sections. 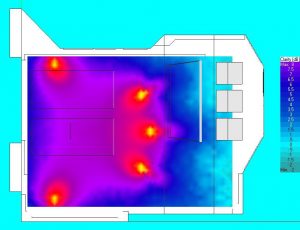 The booths, however, possess very dry acoustics with minimum residual sound. This creates a very discernable sound, giving it the potential to be rather punchy once mixed.

The larger booth can accommodate a drum set, a set of amps, most acoustic instruments or even 3 to 4 singers or speakers. The smaller, acoustically fully dry booth is suitable for an individual speaker or guitar amp.

The drier sound of both booths can be subsequently processed with reverb, delay and similar effect units. This is advantageous in allowing the reverb to complement not only the tempo and harmonic structure of the compositions, but most importantly the timbre of the instrument itself.

The studio is also equipped with remote control systems. If desired, musicians can start and stop recording by themselves directly from the recording rooms. This system allows performers to see what they are recording, and select the takes that suit their needs.

By having direct visual control of their own source material, our musicians are far more productive in capturing and building up the playback layers they seek.